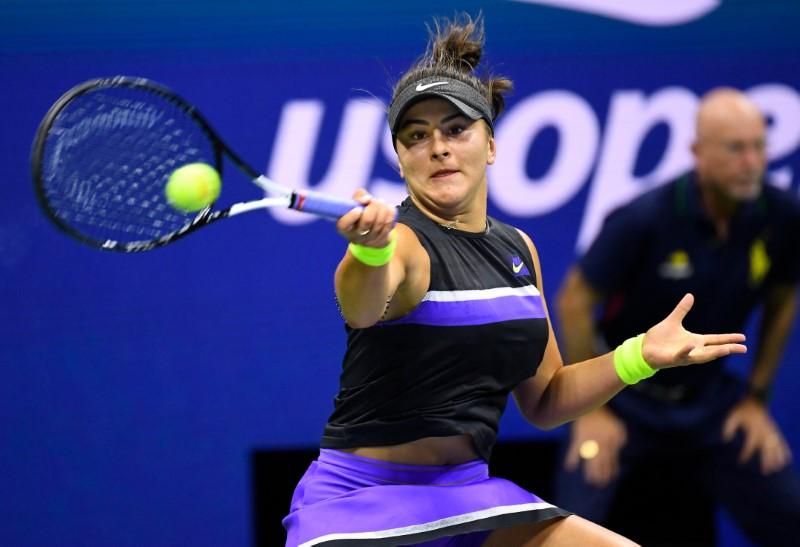 NEW YORK (Reuters) – Canadian teenager Bianca Andreescu’s dream run at the U.S. Open continued on Thursday as she powered past Belinda Bencic 7-6(3) 7-5 to set up a highly-anticipated final with Serena Williams on Saturday.

Andreescu, who has already won titles at Indian Wells and Toronto during her breakout 2019 season, unleashed a torrent of bruising groundstrokes to defeat the Swiss on a warm night at Arthur Ashe Stadium.

Momentum shifted on the first point of the first set tiebreak when Bencic double faulted and her previously immaculate play began to crumble and Andreescu cruised from there.

Bencic finally broke Andreescu to open the second set but despite stretching her lead to 4-1 and 5-2, Andreescu fed off the supportive crowd to level at 5-5 after another costly Bencic double fault.

Andreescu booked her ticket to her first Grand Slam final when Bencic sent a forehand into the net on match point to end the tense first-time encounter.

The final will pit power against power when Andreescu takes on her childhood hero Williams, who claimed her first U.S. Open title in 1999 before Andreescu was even born.

Despite being sidelined at times with injury this year, Andreescu has been a giant slayer when healthy, posting a 7-0 record against top 10 opponents while posting a 33-4 record overall.

Her route to the final has included wins over former world number one Caroline Wozniacki and rising Belgian Elise Mertens.

Thursday’s win marks a remarkable turnaround for the Ontario native who was born to Romanian parents in 2000.

Andreescu lost in the first round of U.S. Open qualifiers last year and finished 2018 ranked world number 178 but will be at least world number nine on Monday and world number five if she can upset Williams.

In their only previous meeting Andreescu led Williams 3-1 at the Rogers Cup final in Toronto last month before the 37-year-old was forced to retire due to back spasms.