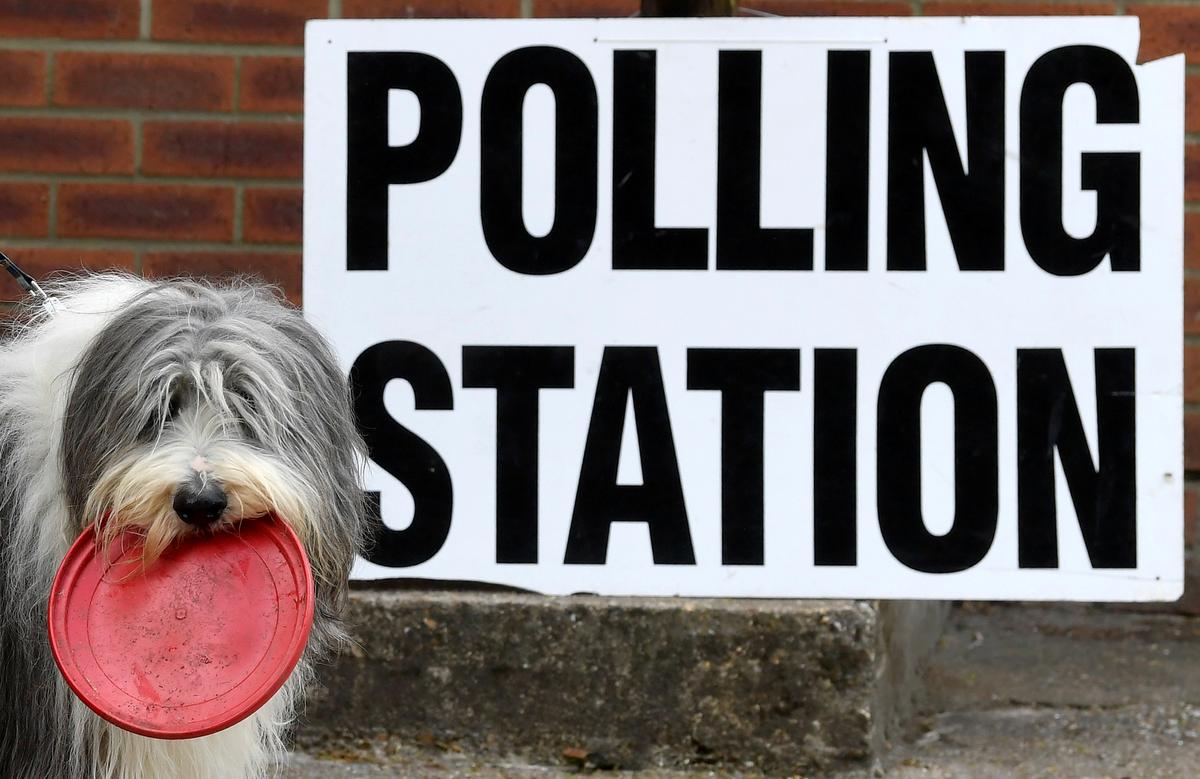 LONDON (Reuters) – How the United Kingdom’s election on Dec. 12 works and when the results will be known.

FILE PHOTO: A dog is pictured outside a polling station in Sonning, May 23, 2019. REUTERS/Toby Melville

WHAT ARE PEOPLE VOTING FOR?

– The country is divided into 650 constituencies.

– Each constituency equates to one seat in parliament’s House of Commons. There are:

– In each constituency, voters vote for a local candidate.

– Candidates represent a political party, or are independent.

– The candidate who receives the most votes wins the seat.

– Votes can be cast in person at polling stations across the country or in advance by post.

– There are 45.8 million registered voters in England, Wales, Scotland and Northern Ireland. (1)

– British citizens resident in the country and aged 18 years or over on Dec. 12 are eligible to vote.

– Irish and some Commonwealth citizens resident in the country can also vote. Britons living overseas can also vote if they have registered to vote in Britain during the previous 15 years.

WHEN ARE THE RESULTS ANNOUNCED?

– An exit poll published at 2200 GMT usually gives a good idea of how the election has gone. In three of the last four elections, this poll has correctly called the overall result, albeit with a margin of error on actual numbers of seats.

– Most constituencies begin counting votes immediately after the polls close at 2200 GMT.

– The first two constituency results are usually available by 2300 GMT, with others following in the early hours of Dec. 13. The bulk come between 0200 and 0300 GMT.

– All results should be declared by the end of Dec. 13.

– If there is a clear winner or loser based on the exit poll and the subsequent declaration of actual results, an opposition leader may choose to concede, or a winner may declare victory.

– If the result is expected to be close, parties are likely to wait until almost all the results are in.

HOW MANY SEATS TO WIN?

– An absolute majority in parliament is 326 seats.

– However, the actual number for a working majority is lower. This is because lawmakers elected for the Sinn Fein party in Northern Ireland do not take up their seats.

– For example, at the 2017 election Sinn Fein won seven seats, effectively lowering the threshold at that election to 322.

WHAT IF THERE IS NO CLEAR WINNER?

– If no party wins a majority, it is called a ‘hung parliament’.

– If this happens, parties can try to form an alliance with one another to give them enough support to win a vote in parliament.

– The incumbent – in this case Prime Minister Boris Johnson – would get first try at putting together an arrangement to command a majority in parliament.

– This could be under a formal coalition arrangement, as happened in 2010 between the Conservatives and the Liberal Democrats.

– It could also be a ‘Confidence and Supply’ agreement with a smaller party to support the government, as happened in 2017 between the Conservatives and the Democratic Unionist Party.

– If Johnson cannot form a government he can resign and recommend that the leader of the largest opposition party is given a chance to form the executive.

For more on the different alliances that could be formed, see:

(1) According to the latest available data from the Office for National Statistics, which was collected in December 2018 and released in March.