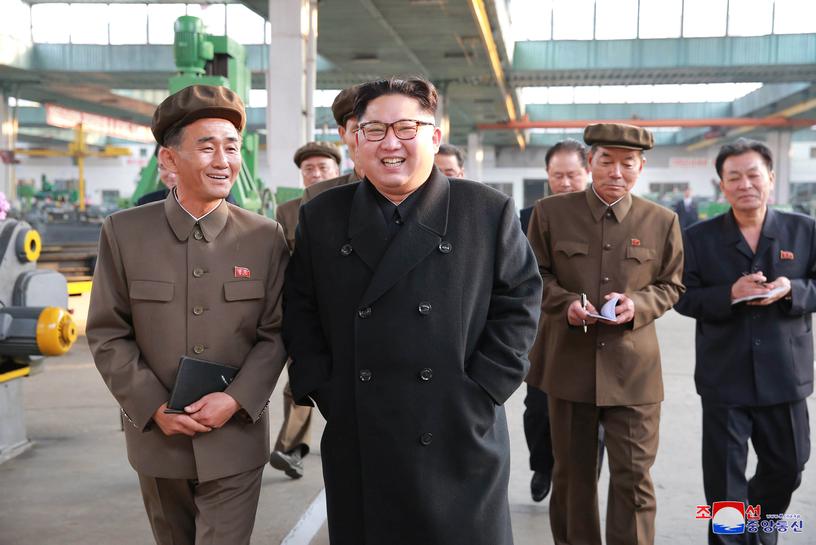 North Korean leader Kim Jong Un visits a factory in this undated picture provided by KCNA in Pyongyang on November 4, 2017. KCNA via Reuters

The report said that throughout 2017 there had been continued movement of parts and components into and out of two parts yards adjacent to the constructions halls in the center of the shipyard.

It said the Nov. 5 images showed two large circular objects that could be sections of a submarine’s pressure hull. It said these appeared larger than those for North Korea’s ROMEO-class attack submarine.

Images of a test stand indicated continued testing of a mechanism for ejection launch of missiles from a submarine. However, the report said no activity could be seen suggesting preparations for a new test of a submarine-launched missile.

North Korea has been working to develop a nuclear-tipped missile capable of reaching the United States, sparking a major international crisis in which U.S. President Donald Trump has said that all options are under consideration, including military ones.

North Korea is also thought to be working on a solid-fuel missile for submarine launches.

Last month, The Diplomat magazine quoted a U.S. government source as saying U.S. military intelligence had detected a new diesel-electric submarine under construction at Sinpo and dubbed it the Sinpo-C. It said the submarine was likely a larger successor to North Korea’s single experimental ballistic missile submarine.

North Korea has conducted dozens of missile tests this year and its largest and biggest nuclear test on Sept. 3. The past two months have seen a relative lull and it has not tested a missile since firing one over Japan on Sept. 15.

Another article in The Diplomat last month quoted a U.S. government source as saying that North Korea had tested a new solid fuel engine sometime between Oct. 15 and Oct. 21. U.S. intelligence officials have declined to comment on this.