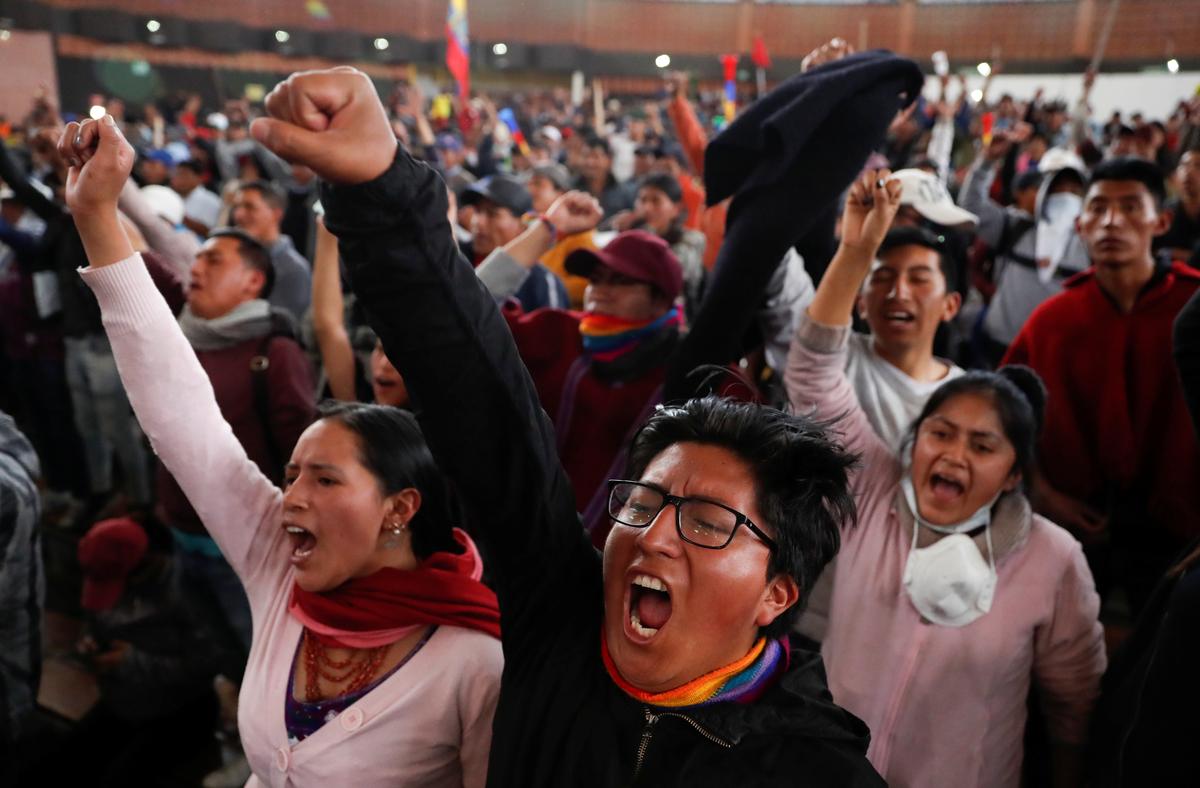 QUITO (Reuters) – Indigenous leaders in Ecuador captured and publicly paraded eight police officers before a crowd on Thursday, pushing back against a tough government crackdown on anti-austerity protests that have shaken President Lenin Moreno’s administration.

In an escalation of week-long demonstrations over Moreno’s ending of fuel subsidies and loan deal with the International Monetary Fund (IMF), protesters detained the officers at a cultural center in Quito being used as an opposition base, Reuters witnesses said.

The eight officers were forced on stage in front of thousands of people. Looking scared, the officers were asked to take off their helmets, bullet proof vests and boots.

The action followed clashes with police during a nationwide strike on Wednesday that killed at least one protester in the highland capital. The ombudsman’s office is investigating reports of other fatalities.

The unrest in Ecuador is the latest flashpoint in Latin America over unpopular structural economic reforms. Argentine President Mauricio Macri was trounced in an August primary vote amid stiff opposition to an IMF deal he signed last year.

Complaining about a lack of local media coverage of police violence, indigenous leaders asked TV journalists onto the stage and demanded that broadcasters show the scene live.

“We’re going to radicalize (the protests) with more force, my friends,” Jaime Vargas, head of indigenous group Conaie, told the cheering crowd. “I’ve just ordered our partners in the Amazon to close all oil wells.”

In a message to Moreno, Vargas added: “Don’t play with indigenous people.”

The protesters want Moreno to repeal austerity measures that his government passed in keeping with a $4.2 billion IMF loan. They also asked for the bodies of any dead protesters to be brought to the assembly.

The government responded by calling for the police officers to be freed as a condition for talks.

“We demand that any process of dialogue be done in a framework of peace,” the government’s secretary general Jose Briones said in a brief televised address.

One of the police officers told the crowd at the cultural center that his group had approached the protesters in hopes of showing them that security forces were not all abusive.

Since last week, security forces have turned tear gas and water cannons on protesters who have set up burning barricades and hurled stones at police lines.

Confirming the death of a protester on Wednesday, the ombudsman, a state office that monitors conflicts, said the man died of brain trauma, possibly from a tear gas canister to the head.

“We’re not used to this kind of repression,” ombudsman Freddy Carrion told Reuters by phone, worrying about a potential spiral of violence on both sides.

The unrest has slashed the Andean nation’s oil production and forced the government to relocate to the coastal city of Guayaquil. More than 800 people have been arrested and more than 400 wounded, according to authorities.

Protests erupted in the nation of 17 million people last week when truck drivers took to the streets over fuel price rises. But indigenous protesters have now taken the lead, with many walking from surrounding provinces to Quito.

Moreno, 66, who succeeded leftist leader Rafael Correa in 2017, has repeatedly refused to restore the fuel subsidies, defending their elimination as part of overdue efforts to rein in the fiscal deficit.

Past protests have brought down presidents in Ecuador, but Moreno says he is not quitting. Without offering evidence, he has accused Correa and leftist Venezuelan President Nicolas Maduro of plotting to oust him.

Interior Minister Maria Paula Romo said that 17 people were arrested at the airport in Quito early on Thursday, most of whom she said were Venezuelan. She did not say why they were arrested but said they had information about the movements of Moreno and the vice president.

Oil Minister Carlos Perez said the OPEC member nation had lost 520,000 barrels of production from the unrest, including 83,000 barrels from private companies for a total loss of $28 million, after protesters entered some fields.

Late on Wednesday, Romo apologized to the country after police fired tear gas near two universities and the cultural center in Quito. She said police have faced vandalism and thanked indigenous protesters for marching peacefully.