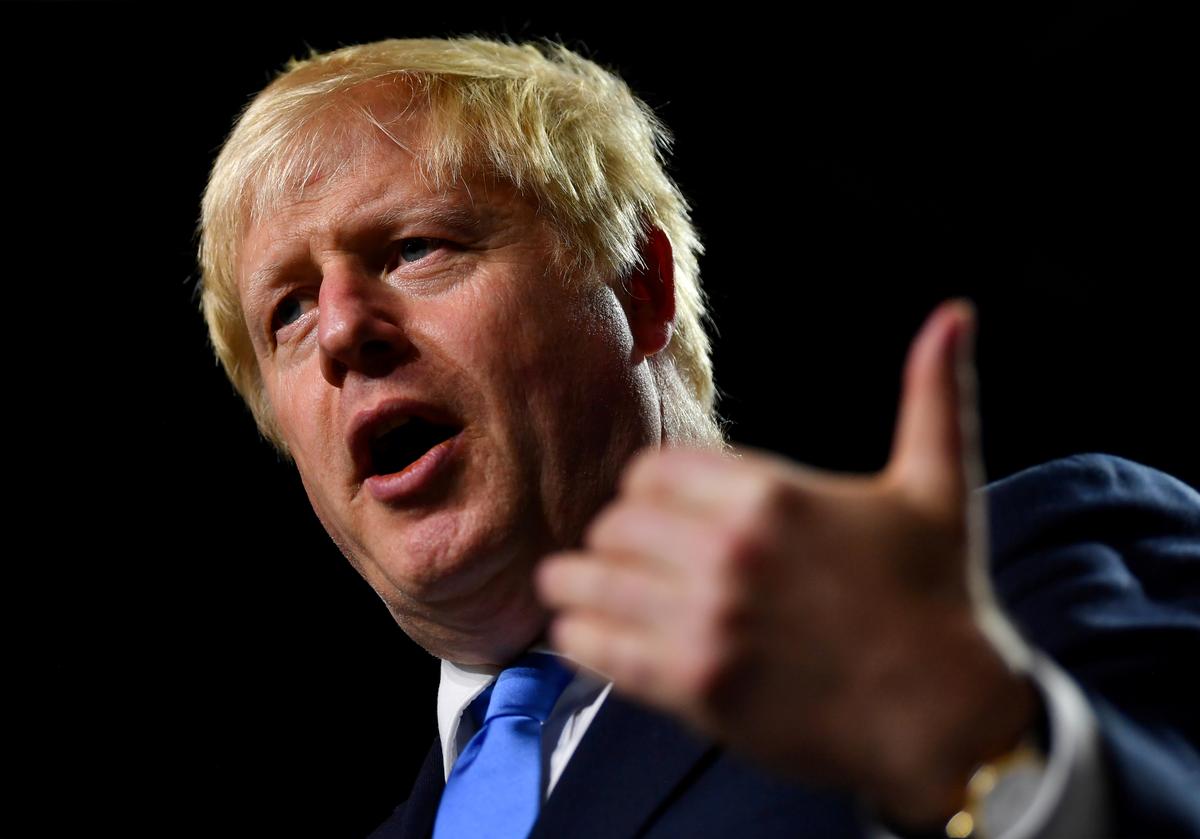 LONDON (Reuters) – Prime Minister Boris Johnson on Monday ruled out ever asking the European Union to delay Britain’s departure from the bloc, making an implicit warning to lawmakers that he would be forced to call an election if they tied his hands on Brexit.

Johnson’s promise to take the country out of the European Union on Oct. 31 with or without a divorce deal has propelled the United Kingdom towards a constitutional crisis and a battle with the 27 other members of the bloc.

With the United Kingdom less than 60 days away from a possible no-deal exit, an alliance of opposition lawmakers are plotting with rebels in Johnson’s party to block a no-deal exit and force him to delay Brexit for three months.

In an thinly-veiled warning to lawmakers, Johnson said he would never delay Brexit which was postponed twice by his predecessor, Theresa May.

“I want everybody to know there are no circumstances in which I will ask Brussels to delay: we are leaving on 31 October, no ifs or buts,” Johnson said in a hastily organised statement at a lectern outside Number 10 Downing Street.

Johnson, the face of the Vote Leave campaign in the 2016 referendum, added that if lawmakers voted to delay Brexit they would “plainly chop the legs out from under the UK position and make any further negotiation absolutely impossible”.

The intervention by Johnson is part of the political chess game over Brexit ahead of parliament’s return from its summer break on Tuesday: In essence, Johnson is warning parliament he will go for an election as early as Oct. 14 if they defy him.

Rebels and opponents of the government say Johnson is betting on an election that he will cast as being forced on him by opponents of Brexit in parliament.

Lawmakers opposed to a no-deal Brexit will seek on Tuesday to take control of parliamentary time on Wednesday to pass legislation which would force Johnson to seek a three-month delay to Brexit. If they defeat the government, Johnson will then seek an election.

More than three years since the United Kingdom voted 52-48% to leave the European Union, it is still unclear on what terms, or indeed whether, Brexit will take place.

After Johnson’s enforcers warned rebels they would be kicked out of the party if they defied him, speculation mounted that he would call for an election just days before an EU summit due on Oct. 17-18.

Under British law, two-thirds of lawmakers must support holding an early election, and Johnson is not certain to get that backing.

The United Kingdom has held a variety of extraordinary votes in recent years. In 2014, Scots rejected independence in a referendum; in 2015, then-Prime Minister David Cameron won a surprise majority on a pledge to hold an EU referendum but lost the referendum the following year.

After winning the top job in the chaos following the referendum, then-Prime Minister Theresa May bet on a 2017 snap election but lost her majority. Johnson took over from May in July after she failed three times to get a Brexit divorce deal approved by parliament.

More than three years since the United Kingdom voted 52-48% to leave the European Union, it is still unclear on what terms, or indeed whether, Brexit will take place.

U.S. Vice President Mike Pence, on a visit to Ireland, said he would encourage both Ireland and the United Kingdom to work on Brexit issues based on the 1998 Good Friday peace agreement.

The issue of the post-Brexit border between EU member Ireland and British-ruled Northern Ireland has been a key sticking point in the impasse.

The default position is that Britain will leave on Oct. 31 without a deal unless a divorce agreement is struck with the bloc and ratified by the British parliament or legislation is passed to delay or revoke the departure notice.

Johnson as cast rebels as EU “collaborators” who are undermining the government’s negotiating hand in seeking a withdrawal agreement by blunting his threat of a no-deal Brexit.

“Their (the government’s) strategy, to be honest, is to lose this week and then seek a general election,” said David Gauke, a former justice minister who is one of the rebel Conservative lawmakers.

Johnson has a working majority of just one seat in the 650-seat lower house of parliament and British media suggested about 20 Conservative lawmakers were prepared to rebel against him.

An election would open up three main options: a Brexit-supporting government under Johnson, a Labour government led by veteran socialist Jeremy Corbyn or a hung parliament that could lead to a coalition or minority government of some kind.