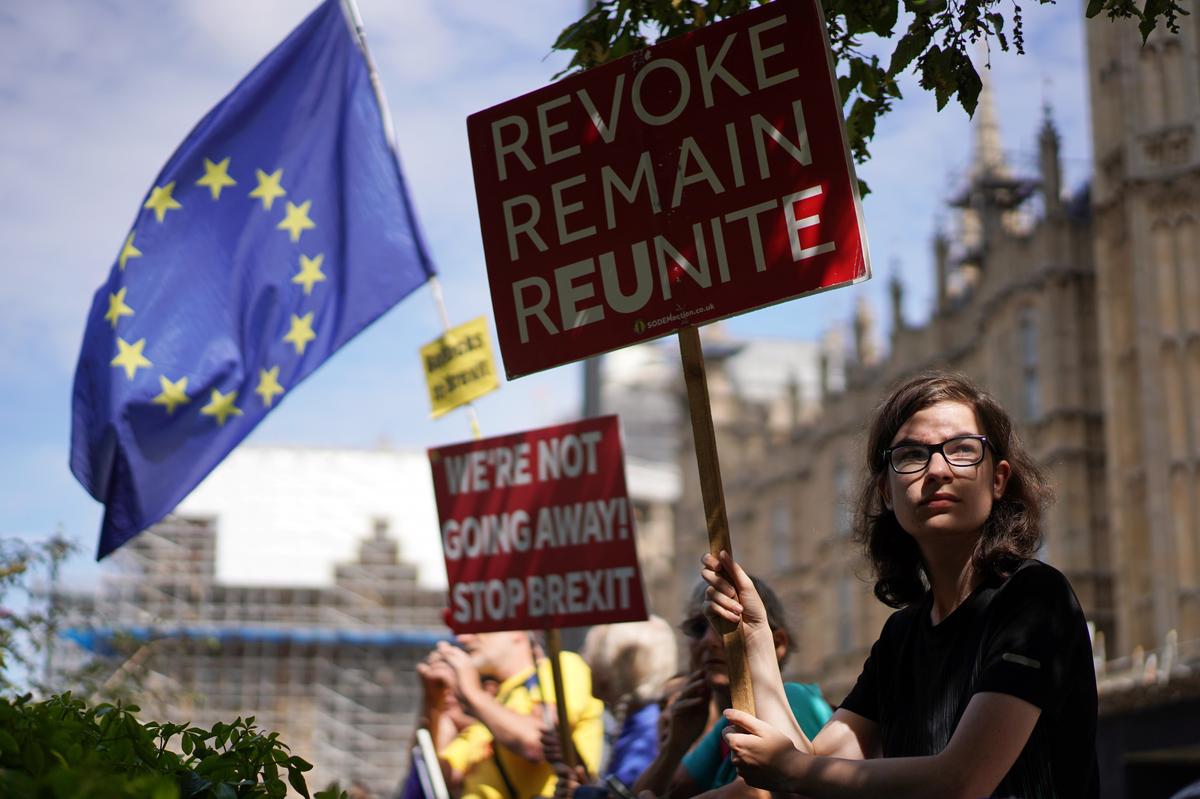 LONDON (Reuters) – British Prime Minister Boris Johnson will limit parliament’s ability to derail his Brexit plan by cutting the amount of time it will sit between now and EU exit day on Oct. 31, infuriating opponents who urged Queen Elizabeth to intervene.

In his boldest move yet to take the country out of the European Union with or without a divorce deal, Johnson set Oct. 14 for the Queen’s Speech – the formal state opening of a new session of parliament that is proceeded by a suspension of the House of Commons.

The queen agreed to the date, effectively shutting parliament from mid-September for around a month.

Incensed, opposition leaders wrote to the queen to express their concern and asked for a meeting, threatening to drag the 93-year-old monarch into the constitutional crisis.

“There will be ample time in parliament for MPs (Members of Parliament) to debate the EU, to debate Brexit and all the other issues, ample time,” Johnson told reporters.

Asked if he was trying to block MPs from delaying Britain’s EU departure, he replied: “That is completely untrue.”

While suspending parliament ahead of a Queen’s Speech is the historical norm in Britain, the decision to limit parliamentary scrutiny weeks before the country’s most contentious policy decision in decades prompted an immediate outcry.

It also increased the chances Johnson could face a vote of no-confidence in parliament, potentially leading to an election.

“Make no mistake, this is a very British coup,” John McDonnell, the second most powerful man in the opposition Labour Party, said. “Whatever one’s views on Brexit, once you allow a prime minister to prevent the full and free operation of our democratic institutions you are on a very precarious path.”

The Church of England said a chaotic EU exit would hurt the poor, the speaker of parliament said politicians must be heard and a group of cross-party lawmakers sought a legal injunction.

U.S. President Donald Trump tweeted: “Would be very hard for Jeremy Corbyn, the leader of Britain’s Labour Party, to seek a no-confidence vote against New Prime Minister Boris Johnson, especially in light of the fact that Boris is exactly what the U.K. has been looking for, & will prove to be “a great one!” Love U.K.”

More than three years after the United Kingdom voted 52% to 48% to quit the European Union, it is still unclear on what terms – or indeed whether – the bloc’s second largest economy will leave the club it joined in 1973.

With just 65 days until exit day, parliamentarians are battling to prevent the prime minister from steering the country out of the EU without a transition deal, pitching one of Europe’s most stable countries into uncharted territory.

On Tuesday, the leaders of Britain’s opposition parties had agreed to seek to use parliamentary procedure to force Johnson to ask Brussels for a delay to Brexit beyond Oct. 31. But with the prime minister finally showing his hand, they may try to bring him down instead.

Corbyn said he would seek to use parliamentary mechanisms and then call a no-confidence vote when the time was right.

With Johnson holding a working majority of just one seat in the 650-seat parliament, members of his party who oppose a no-deal Brexit will have to decide where their loyalties lie.

An anti-Brexit protestor holds a sign outside the Houses of the Parliament in London, Britain August 28, 2019. REUTERS/Henry Nicholls

“I think (a no-confidence vote) is more likely, because if it is impossible to prevent prorogation, then I think it’s going to be very difficult for people like myself to keep confidence in the government,” Conservative Party lawmaker Dominic Grieve said.

Fellow Conservatives such as Philip Hammond, a former finance minister, described it as profoundly undemocratic.

Parliament’s speaker John Bercow, a powerful figure who has shown a willingness to break procedural precedents in order to ensure lawmakers can debate Brexit fully, said it was “blindingly obvious” the move was designed to restrict debate.

“Shutting down Parliament would be an offence against the democratic process and the rights of Parliamentarians as the people’s elected representatives,” Bercow, who voted to remain in the EU in 2016, said in a statement.

Sterling fell sharply, losing around a cent against the U.S. dollar and the euro, as investors took the news as a sign that a no-deal Brexit, and the prospect of a hit to Britain’s economy, was more likely.

Johnson argued, however, that the move was designed to allow his government to press on with its domestic agenda.

Typically, a Queen’s Speech is held every year. Johnson is a new prime minister, who took over from Theresa May in July, and so would be expected to have his own legislative priorities.

He says he wants to agree a divorce deal with Brussels but needs the bloc to change its stance on a key sticking point around neighbour Ireland first. A leading campaigner in the 2016 Brexit referendum, he has also said Britain must leave the EU to maintain faith in politics.

Parliament returns from its summer break on Sept. 3 and had been expected to sit for two weeks before breaking up again to allow political parties to hold their annual conferences. Typically it begins sitting again in early October.

The Queen’s Speech is the formal state opening of a new session of parliament at which Queen Elizabeth reads a speech prepared by the government.

A Queen’s Speech on Oct. 14 would delay parliament’s return and leave lawmakers with just over two weeks until Britain is due to leave the EU on Oct. 31. Those lawmakers opposed to a no-deal Brexit will likely have to make their response next week if they are to avoid running out of time.