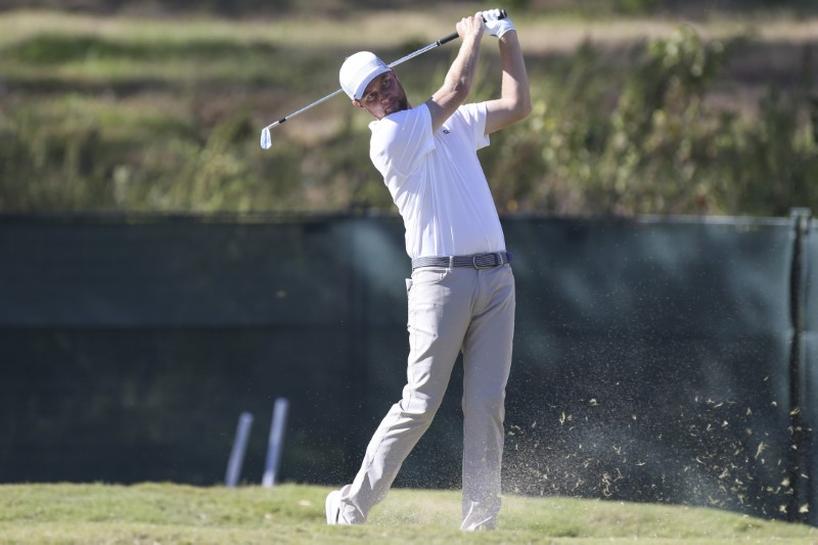 FILE PHOTO: Chris Kirk hits from the tee box of the 10th hole during the first round of the Sanderson Farms Championship golf tournament at Country Club of Jackson. Mandatory Credit: Spruce Derden-USA TODAY Sports

Kirk wielded a hot putter to run off seven birdies before capping his day with an eagle at the par-five 18th for a nine-under-par 63 on the Plantation Course at Sea Island Resort.

He leads fellow American Joel Dahmen by one stroke.

Leader Kirk said he had enjoyed one of those joyful days on the greens that golfers dream of.

“This is the first time in a while it doesn’t feel forced,” the 2013 champion said of his putting.

“I’m just looking at it, lining it up and whacking it. That’s where we all aspire to be so it’s nice to have that feeling for a change.”

Most of the good scores were carded at the Plantation, the easier of the two courses being played, with Nick Watney and Brice Garnett best on the Seaside course at five-under 65.

Snedeker had a 67 on the Seaside as he ended a frustrating run on the sidelines with a sternum injury that he said had prompted him to consult no less than 15 specialists for what was diagnosed as an unstable sternum joint.

“I felt I should have a good round if I could keep my nerves under control, not get too excited out there. I did a great job of that, staying patient, not trying to force it, and made a few birdies coming down the stretch and got myself in contention for hopefully a low round tomorrow.”

The 36-year-old, an eight-times winner on the PGA Tour, had not played since experiencing severe pain during his swing that forced him to pull out of the British Open on the eve of the tournament in July.

He opted not to undergo surgery for his injury, preferring instead to let his body heal naturally, with assistance from a new diet free of carbohydrates and sugar.

“It’s been really tough because I love to eat,” he said.

Reporting by Andrew Both in Tokyo; Editing by Ian Ransom

Indonesia’s low-lying capital flooded for second time this year
Factbox: Latest on coronavirus spreading in China and beyond
UEFA says monitoring coronavirus, not yet clear if any impact on Euro 2020
IKEA reduces climate footprint for the first time
Coronavirus spreads in China prisons, Korean church as fears weigh on global markets