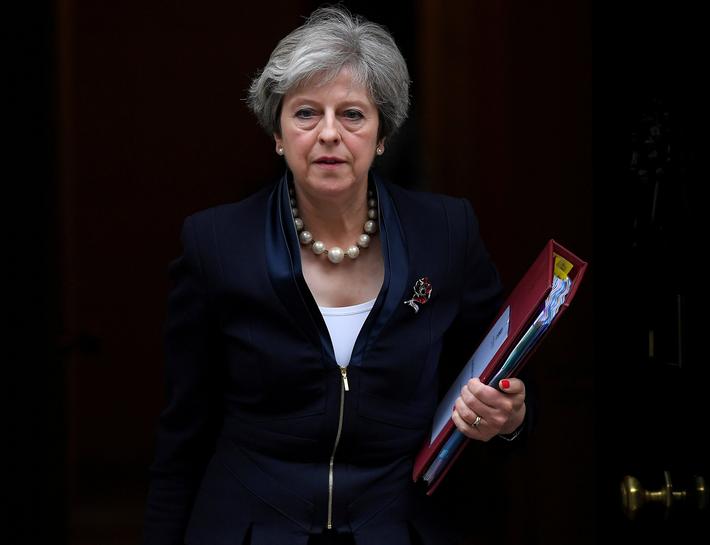 
LONDON (Reuters) – British Prime Minister Theresa May withstood new attempts to force concessions on her blueprint for leaving the European Union on Wednesday, the second day of a parliamentary debate that is deepening divisions over Brexit.

May has been weakened by losing the Conservative Party’s majority in a June election and faces hostility from many lawmakers, including some Conservatives, to various parts of the EU withdrawal bill which requires parliamentary approval.

All attempts to amend the bill, on severing ties with the EU, have been voted down so far, but a debate next month on precisely when Britain should leave, and whether a time should be set at all, is be to test her authority.

May urged lawmakers to work together ahead of a debate on several amendments aimed at entrenching EU protections on a wide range of issues from the environment to workers’ rights.

“We will be leaving the European Union on the 19th of March, 2019, and of course there is a lively debate going on in this place and that’s right and proper, and that’s important,” May said during the weekly prime minister’s question time.

“We are listening carefully to those who wish to improve the bill and I hope that we can all come together to deliver on the decision that the country took that we should leave the European Union.”

The debates are likely to last for weeks on a bill seen by May as crucial to give companies confidence that there will be no major legal changes that affect business when Britain leaves the EU in March 2019.

On the first day of debate on Tuesday, lawmakers broke down party lines in turning on each other with catcalls, jeers and accusations of treachery.

Behind the debates is the fear of pro-Brexit lawmakers that Britain may never leave the EU, and of pro-EU politicians who are worried Britain might crash out of the EU without a deal.

‘Exit day’ has become the focus for most in parliament with some lawmakers saying pro-Brexit politicians want a firm date on the bill – 11:00 p.m. on March 29, 2019 – to limit flexibility in talks with the EU that are deadlocked largely over money.

May and her ministers are stepping up contacts with EU officials, trying to find ways to put pressure on negotiators in Brussels to try to push the talks forward by December, movement businesses say they need to make investment decisions.

On Wednesday, May met Manfred Weber, a leading lawmaker in the European Parliament and an ally of German Chancellor Angela Merkel, in London, where he expressed confidence that the difficulties in the talks could be overcome.

The parliamentary debate is yet another headache for a prime minister, who has lost two ministers to scandals and faces calls to fire her foreign minister, Boris Johnson, over remarks he made about a jailed Iranian-British aid worker in Iran.

She has tried to ease tensions by offering lawmakers some concessions on the bill, but has yet to convince all her lawmakers, many of whom have said they will not vote with the government on at least one of the debates, namely on ‘exit day’.