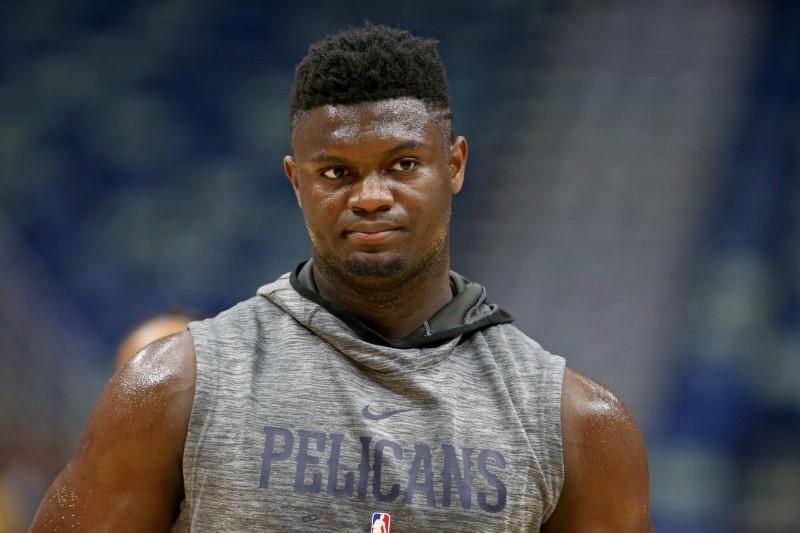 
New Orleans Pelicans rookie forward Zion Williamson will be sidelined up to two months after undergoing arthroscopic surgery on his right knee on Monday.

The Pelicans said Williamson was diagnosed with a torn lateral meniscus and the timetable for his return is 6-8 weeks.

Williamson, the first overall pick in the 2019 NBA Draft, underwent tests on the knee on Friday when soreness persisted. He shot 71.4 percent while averaging 23.3 points and 6.5 rebounds in the preseason.

He is the new face of the Pelicans after disgruntled All-Star Anthony Davis was traded to the Los Angeles Lakers in the offseason. Based on the schedule laid out by the team, Williamson will likely make his NBA debut in mid-December or close to the start of 2020.

—Pascal Siakam is staying with the NBA champion Toronto Raptors, officially signing a four-year contract extension reported to be worth $130 million.

The fourth-year forward posted career-high averages for points (16.9), rebounds (6.9) and assists (3.1) last season and is viewed as the focal point of a team searching to rebuild its identity on the fly after Kawhi Leonard helped the franchise win the title last season.

—Boston Celtics forward Jaylen Brown agreed to a four-year, $115 million contract extension, his agent told ESPN. The extension, confirmed by agent Jason Glushon, keeps Brown in Boston through the 2023-24 season at an average of $28.75 million per season.

The No. 3 overall pick in the 2016 NBA Draft, Brown was entering the final year of his rookie contract.

—Domantas Sabonis signed a four-year, $77 million contract extension with the Indiana Pacers, according to multiple reports.

Sabonis, who was reportedly on the trade block, becomes a part of the core along with Malcolm Brogdon, Myles Turner and Victor Oladipo. ESPN reported Sabonis can push his total earnings over four years to $85 million, citing information from agent Greg Lawrence.

The 23-year-old Sabonis was acquired along with Oladipo from Oklahoma City in 2017 in the Paul George trade. Sabonis averaged 14.1 points, 9.3 rebounds and 2.9 assists last season and led all NBA bench players with 27 double-doubles. He’s expected to be in the starting lineup this season.

The Athletic reported that the extension includes $86 million in guaranteed money and $20 million in incentives — about $10 million of which should be readily attainable, according to reporter Sam Amick. Hield will start at $24 million in 2020-21, with the salary decreasing 8 percent per year.

Hield, 26, is a key piece on a young team. The fourth-year pro averaged career-highs with 20.7 points, 5.0 rebounds and 2.5 assists last season while starting all 82 games and shooting 42.7 percent from 3-point range.

Murray, 23, can earn up to $70 million under terms of the new deal if he achieves all bonuses, agent Rich Paul told ESPN. He is entering his third season after missing the entire 2018-19 campaign with a torn ACL.

—Taurean Prince agreed to a two-year contract extension with the Brooklyn Nets. The deal is worth up to $29 million, ESPN reported.

Prince was acquired from the Atlanta Hawks in July as part of the massive roster overhaul that included big names Kyrie Irving, Kevin Durant and DeAndre Jordan.

The veteran shooting guard, who parlayed his time in the BIG3 league capped by an MVP award into a deal with the Pistons in September, failed to earn the final roster spot. Power forward Christian Wood is being kept to provide frontcourt depth.

The veteran shooting guard, who parlayed his time in the BIG3 league capped by an MVP award into a deal with the Pistons in September, failed to earn the final roster spot. Power forward Christian Wood is being kept to provide frontcourt depth.