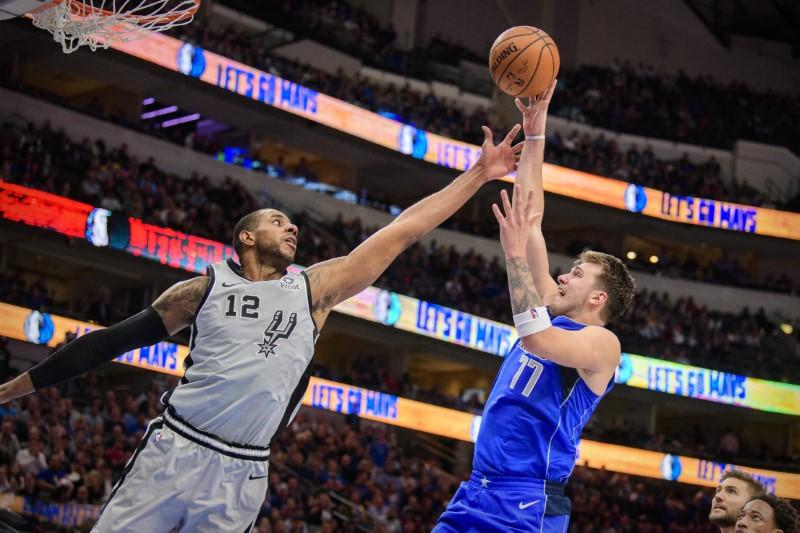 Luka Doncic poured in a career-high 42 points, grabbed 11 rebounds and recorded 12 assists to lead the Dallas Mavericks to a 117-110 win over the visiting San Antonio Spurs on Monday for their second straight victory.

The triple-double was Doncic’s league-leading sixth of the season.

Finney-Smith had 22 points for Dallas, Kristaps Porzingis added 18 points and 10 rebounds, and Jalen Brunson scored 11 points in the win. It was the first time the Mavericks scored 110 or more points against San Antonio since January 2010.

DeMar DeRozan scored a season-high 36 points for the reeling Spurs, who lost their sixth straight game. San Antonio hadn’t lost that many in a row since the 2010-11 season, when it dropped six straight in March and April. The Spurs went on to finish that regular season with 61 wins.

Montrezl Harrell had 28 points and 12 rebounds for the Clippers. George, who scored 70 total points in his previous two games, finished with 18 points against his former club. Clippers star Kawhi Leonard missed his third consecutive game due to a left knee contusion.

Chris Paul scored 22 points and recorded four steals, and Danilo Gallinari had 14 points for the Thunder. However, Gallinari missed a potential game-winning shot near the end.

James Harden and Russell Westbrook combined 64 points as host Houston won the battle of the backcourts, defeating Portland. While Harden scored 23 of his 36 points in the first half, Westbrook came alive in the second half with 15 of his 28 points.

Westbrook added 13 rebounds and 10 assists overall as Houston extended its winning streak to eight games. The Rockets were bolstered by the return of center Clint Capela (22 points, 20 rebounds) from a concussion and Danuel House Jr. (11 points) from a sore back.

Damian Lillard and CJ McCollum, the Trail Blazers’ high-scoring guard tandem, totaled 38 points on 14-of-34 shooting. McCollum had 25 points while Lillard had 13, shooting just 4 of 15 overall and 1 of 6 from 3-point range.

Jayson Tatum scored 14 of his season-high 26 points in the third quarter and added a season-high 11 rebounds, and Boston downed host Phoenix to get back on the winning track.

Kemba Walker produced 19 points for Boston, and Marcus Smart had 17 points before leaving in the fourth quarter with an ankle sprain. Daniel Theis grabbed a season-high 11 rebounds for the Celtics, who had a 10-game winning streak broken in a one-point loss at Sacramento on Sunday.

Devin Booker had 20 points, Kelly Oubre Jr. had 15 points, and Dario Saric had nine points and 10 rebounds for the Suns. Phoenix played without point guard Ricky Rubio (back spasms) in posting a season low in points after winning five of its previous seven games.

Giannis Antetokounmpo scored 33 points and grabbed 10 rebounds, and Milwaukee finished closed the game on a 17-2 run to wipe out a 99-98 deficit and beat host Chicago.

Brook Lopez had 19 points and 10 rebounds to go with five blocked shots for Milwaukee, which won its fourth game in a row. George Hill scored 18, and Donte DiVincenzo finished with 15.

Rookie Daniel Gafford amassed 21 points on 10-of-12 shooting for the Bulls. The second-round draft pick from Arkansas entered the game with zero points in four games off the bench.

Karl-Anthony Towns matched his career high of seven 3-pointers and contributed 29 points and 13 rebounds to lead Minnesota over Utah in Salt Lake City.

Jeff Teague recorded 21 points and 11 assists for Minnesota, which halted a two-game slide. Robert Covington scored 15 points, Kelan Martin added 14 on 6-of-7 shooting and Josh Okogie had 11 for the Timberwolves.

Bojan Bogdanovic scored 18 points but Donovan Mitchell struggled with 5-of-23 shooting while scoring 17 points for Utah, which dropped to 6-1 at home. Rudy Gobert registered 16 points and 14 rebounds.

OG Anunoby scored a career-best 24 points, and Toronto demolished visiting Charlotte for its biggest margin of victory of the season.

Pascal Siakam scored 20 points and Norman Powell contributed 17 for the Raptors, who were returning home after a 3-2 road trip. Terence Davis chipped in with 16 off the Toronto bench as the Raptors improved to 5-0 at home.

Marvin Williams led four other teammates in double figures by scoring 14 for the Hornets, who had won two in a row.

Julius Randle scored 13 of his game-high 30 points during a pivotal first-quarter run for host Knicks, who never trailed in a blowout win over Cleveland.

The Knicks are 2-2 since a 108-87 home loss to the Cavaliers on Nov. 10, when team president Steve Mills and general manager Scott Perry held a postgame press conference to express their unhappiness with New York’s performance.

Randle’s 30-point effort was the first by a Knicks player since April 7. The Cavaliers have dropped four straight since routing the Knicks, including the last three by a combined 48 points. Kevin Porter Jr. led Cleveland with 18 points.

Aaron Holiday scored a career-high 24 points, and brother Justin Holiday added a season-high 20 points as Indiana shook off a sluggish start and continued its success over the Brooklyn with a victory in New York.

The Pacers beat the Nets for the second time this season, 11th time in 12 meetings and sixth straight time in Brooklyn. Aaron Holiday added a career-high 13 assists. T.J. Warren had 19 points while Domantas Sabonis collected 16 points and a career-high 18 rebounds.

The Nets lost for the fourth time in five games and were blown out in their second game without Kyrie Irving (right shoulder impingement). Irving was listed as questionable for the game but was ruled out Monday afternoon. Spencer Dinwiddie started for Irving and scored 28 points.