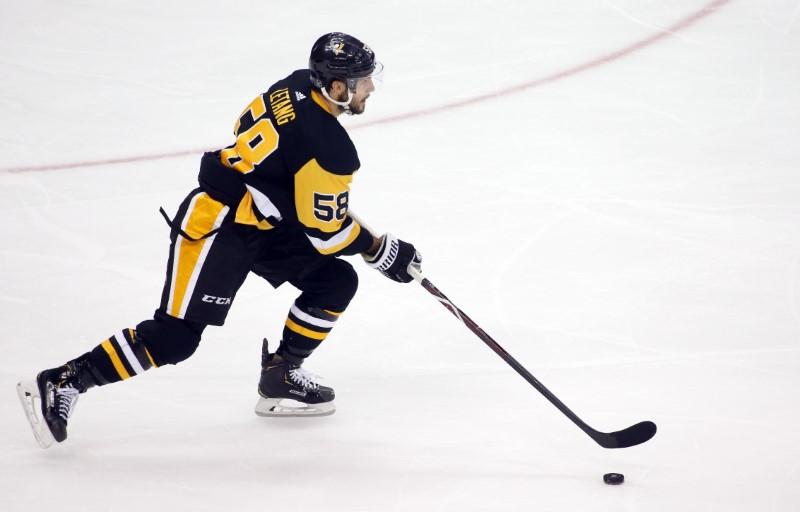 Kris Letang scored twice, and Patric Hornqvist had a goal and two assists Friday to lead the Pittsburgh Penguins to their fifth straight win, 4-2 over the visiting Dallas Stars.

Jared McCann also scored for the Penguins, who have the longest active winning streak in the NHL.

John Klingberg had a goal and an assist, and Roope Hintz also scored for Dallas, which has lost five straight and has just one win in nine games. Anton Khudobin made 29 saves.

Carlson, who is riding a six-game point streak, has 17 points in just nine games. The defenseman has netted two or more points in six of nine contests. Washington goaltender Braden Holtby made 26 saves to record the win, and captain Alex Ovechkin collected his 1,220th career point to move ahead of Jean Beliveau for 42nd place on the league’s all-time list.

The Rangers have dropped three straight games after opening the season with consecutive victories.

Nathan MacKinnon scored with 1:57 left in overtime, and Andre Burakovsky had two goals and added one assist to lead Colorado to a victory in Sunrise, Fla.

Colorado’s other goals were scored by Matt Nieto and Joonas Donskoi. Avalanche goalie Philipp Grubauer made 40 saves — many of them spectacular. Colorado has yet to lose in regulation this season.

Florida’s Jonathan Huberdeau scored twice, tying his career high with eight shots on goal. Sergei Bobrovsky made 36 saves for the Panthers, who also got goals from Brett Connolly and Frank Vatrano (short-handed).