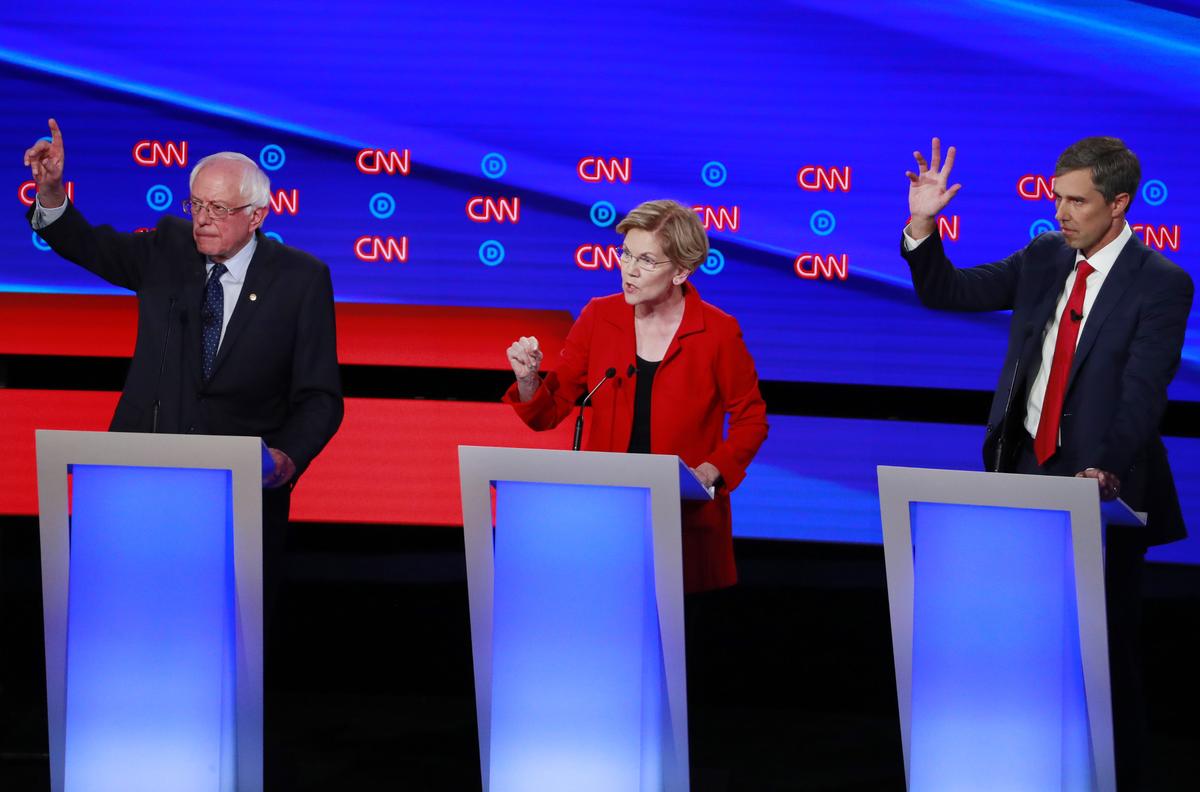 DETROIT (Reuters) – Progressive candidates Bernie Sanders and Elizabeth Warren came under fire from more moderate rivals as the second round of Democratic debates began on Tuesday, spotlighting the ideological divide in the party’s crowded presidential field.

Montana Governor Steve Bullock, participating in his first presidential debate, opened by criticizing his fellow candidates for being too liberal in the first debate last month in Miami.

“Watching that last debate, folks seemed more concerned about scoring points or outdoing each other with wish-list economics than making sure Americans know we hear their voices and will help their lives,” Bullock said.

The debate quickly turned to a dispute about the future of the U.S. healthcare system, with Sanders and Warren aligning to defend Medicare for All proposals that would have government take over the health insurance industry.

Some of their rivals argued the proposal pushed by the progressives would take private insurance away from people who currently prefer their coverage and force a tax increase on the middle class.

“Why do we have to be the party of taking something away from people?” said John Delaney, a former congressman who has been critical of Medicare for All.

He argued that Democrats should not back proposals that would eliminate private insurance.

“They are running on telling half the country that your health insurance is illegal,” Delaney said, pointing to Warren and Sanders.

Warren interjected to defend the proposal.

“We’re not trying to take healthcare away from anyone. That’s what Republicans are trying to do.”

Sanders, who has introduced a Medicare for All bill in the U.S. Senate, said: “Healthcare is a human right, not a privilege. I believe that, I will fight for that.”

The field of about two dozen candidates is vying for attention and financial support in the race for the Democratic nomination to challenge Republican President Donald Trump in November 2020.

AIMING TO MAKE AN IMPACT

Warren and Sanders were in the spotlight as eight rivals, including Mayor Pete Buttigieg of South Bend, Indiana, former congressman Beto O’Rourke and U.S. Senator Amy Klobuchar shared the stage in Detroit.

Lower-tier candidates were aiming to produce the kind of post-debate surge that U.S. Senator Kamala Harris enjoyed after a strong performance in the first debate after confronting front-runner Joe Biden on the issue of race.

She and Biden, the former vice president, will renew their rivalry on the second night of the debate on Wednesday.

The two nights in Detroit could be the last chance for many contenders to debate on the national stage, as the Democratic National Committee will double its fundraising and polling requirements to qualify for participation in the next debates in September and October.

Warren and Sanders, who serve together in the U.S. Senate, appeared on different nights in last month’s debates. Warren, the only top-tier contender on stage the first night, emerged with new momentum after going largely unscathed and showing off her array of progressive policy proposals.

Sanders was mostly sidelined on the next night, standing placidly by as Biden and Harris leaned across him to spar over race.

Warren and Sanders insist they are friends, not rivals, and would not turn on each other for their own political gain.