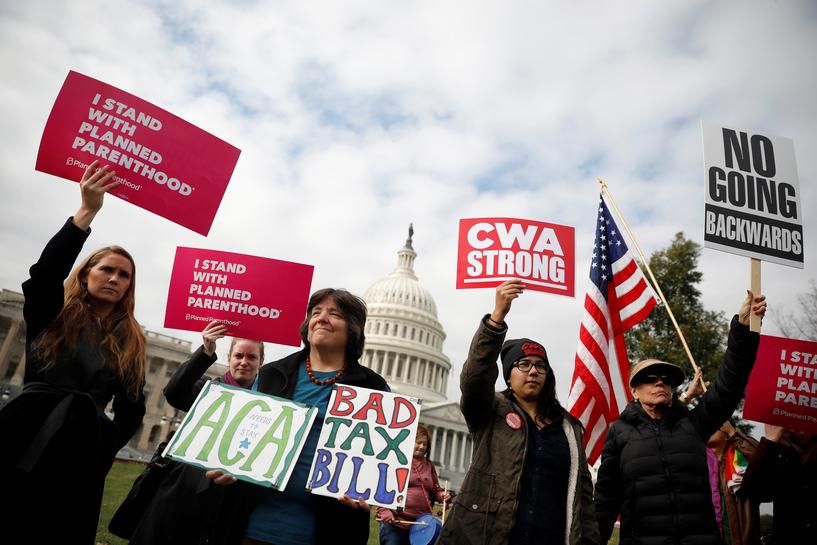 
WASHINGTON (Reuters) – Democrats accused Republicans in the U.S. Senate of changing their tax-cut plan into an attack on Obamacare and skewing it even more toward corporations and the wealthy on Wednesday as tensions rose in the congressional tax debate.

Protestors chant during a rally against the Republican tax bill on Capitol Hill in Washington U.S., November 15, 2017. REUTERS/Aaron P. Bernstein

Late on Tuesday, Republicans produced a new plan that would guarantee permanent tax cuts for corporations, but only temporary relief for individuals, while tying the overall package to an effective repeal of a key part of Obamacare.

Exposing the tax-cut initiative to the same political risks that wrecked a mid-2017 anti-Obamacare push by Republicans, Senate tax committee chief Orrin Hatch unveiled a 226-page amendment that he defended as helpful to the middle class.

The new Republican plan, Hatch said at a committee meeting, would expand the child tax credit and slightly reduce some middle-class tax rates. Taken together these changes “will let us channel even more tax relief to the middle class,” he said.

But those changes would be temporary, while a deep cut in the corporate tax rate would be permanent, under Hatch’s plan, which was widely expected to become the main vehicle for Republicans’ effort to revamp the tax code before year’s end.

The effort is seen by Republicans as critical to their prospects of retaining power in Washington in the November 2018 mid-term congressional elections. Campaigns will get underway in a few weeks. So far, Republicans and President Donald Trump have no major legislative victories from 2017 to show off to voters.

They are hoping that a tax-cut success will fix that problem and they have made progress in recent days while Trump was out of the country on a tour of Asian capitals. He returned late on Tuesday and was scheduled to meet with lawmakers on Thursday.

The House of Representatives was prepared to begin debating its tax bill on Wednesday afternoon, with a vote expected on Thursday. It was approved last week by the House tax committee.

The Senate and House tax plans must eventually be reconciled and merged into a final plan that can pass both chambers before it goes to Trump to sign into law.

Copies of tax legislation are seen during a markup on the “Tax Cuts and Jobs Act” on Capitol Hill in Washington, U.S., November 15, 2017. REUTERS/Aaron P. Bernstein

By including an effective repeal of the individual mandate of Obamacare, formally known as the Affordable Care Act in their tax plan, Senate Republicans have likely ended any possibility of support for it from Democrats, while risking a return to the infighting that sank their earlier anti-Obamacare campaign.

“This is not just another garden variety attack on the Affordable Care Act. This is repeal of that law,” said Senator Ron Wyden, the finance committee’s top Democrat. He blasted Republicans for setting a “double standard” by guaranteeing permanent tax cuts only for corporations.

The individual mandate clause of Obamacare requires healthy younger people to buy insurance or pay a federal penalty. The aim is to hold down coverage costs for those sick or older.

By repealing that penalty, Republicans would raise more than $318 billion over a decade to pay for tax cuts, according to the Joint Committee on Taxation, a nonpartisan unit of Congress.

The nonpartisan Congressional Budget Office separately estimated last week that repealing the mandate would increase the number of uninsured Americans by 13 million by 2027.

It was not immediately clear how many of Hatch’s colleagues will support the revised plan. Republicans hold a slim 52-48 Senate majority. If Democrats remain united in opposition, Republicans cannot lose more than two senators from their ranks and still have enough votes to pass tax legislation.

Trump has backed the inclusion of the mandate repeal in the tax bill. Republican Senator Rand Paul also supports it. But several moderate Republicans, including senators Susan Collins and John McCain, whose ‘no’ votes sank earlier healthcare efforts, expressed uncertainty on Tuesday over tying the tax bill to the healthcare provision details.

U.S. House Speaker Paul Ryan told CNBC television on Wednesday that, while their tax plan does not repeal the mandate, House Republicans would likely approve a final measure hammered out with the Senate that included it.

Hatch’s Senate plan would also expand access to deductions for so-called “pass-through” businesses and increase the child tax credit to $2,000 from the earlier proposed $1,650.

The changes would still keep the tax bill’s cost within procedural limits, adding just under $1.5 trillion over 10 years to the federal deficit and the national debt, according to an estimate released by Hatch.