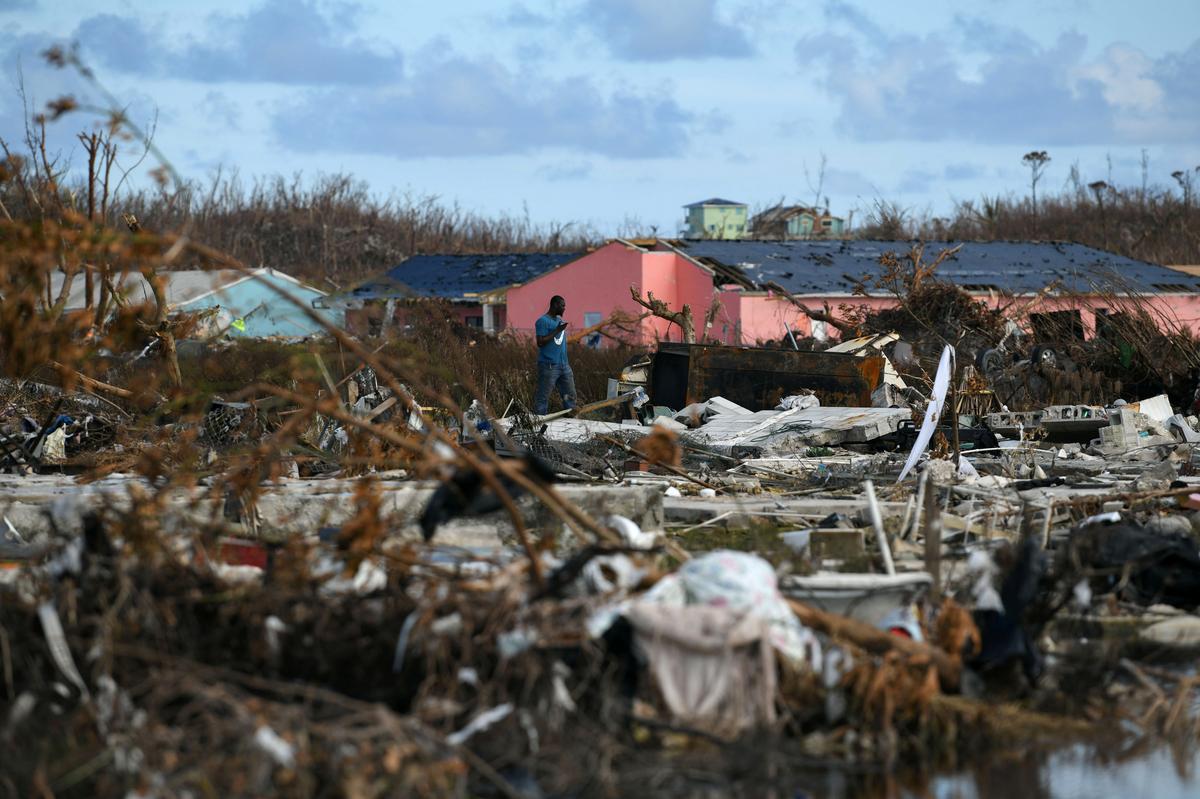 NASSAU, Bahamas/NEW YORK (Reuters) – Emitte Bootle spent 25 years driving school buses on the Bahamas’ Great Abaco Island, but now that Hurricane Dorian has devastated his home, there are no students to drive – and nowhere to take them.

A man searches for belongings amongst debris in a destroyed neighborhood in the wake of Hurricane Dorian in Marsh Harbour, Great Abaco, Bahamas, September 8, 2019. REUTERS/Loren Elliott

He and his wife are considering trying to move to the United States and seek work as a landscaper, trucker or bus driver.

“What the government needs to do is build better houses and infrastructure, and I don’t know if they can do that,” said Bootle, 54. “Abaco may not come back in my lifetime.”

Bootle is not alone. Several Bahamians interviewed by Reuters – on Great Abaco, in Nassau and in Florida, where hundreds of evacuees stepped off a cruise ship on Saturday – said they might attempt to emigrate to the United States rather than face an uncertain reconstruction at home.

It is not clear whether U.S. President Donald Trump’s administration, which has sought to severely restrict legal and illegal immigration, will smooth the path. But a growing chorus of Congress members call for a suspension of visa requirements to help reunite stranded Bahamians with U.S. relatives.

The White House is considering what to do, Acting Commissioner of U.S. Customs and Border Protection Mark Morgan told reporters on Monday.

“I’ve authorized the deployment of an enormous amount of resources to southern Florida to make sure we can receive people coming in from the Bahamas,” Morgan said. “We still have to balance the humanitarian need and assistance of those that need it versus the safety of this country.”

On Sunday, Bahamians were ordered off a ferry headed to Florida if they did not have a U.S. visa, even though others without visas had already traveled to the United States as long as they had a passport and proof of no criminal record.

U.S. Customs blamed the incident on the ferry operator.

But for Bahamians like Anthony Morley, 61, who waited out the storm on a restaurant rooftop, the existing rules may prove too much of an obstacle.

Morley said his passport was lost in the flood. But he does not believe he can stay long in the capital Nassau, where the demand for housing and jobs far outstrips the supply.

“The government says everyone’s being fed, and that’s good,” Morley said. “But for food I can fish. What I need is a house. I don’t have a bed, a refrigerator. I don’t even have a Bible.”

Republicans Marco Rubio and Rick Scott, the two U.S. senators from Florida, which has the country’s largest population of Bahamian-Americans, have asked Trump to relax visa requirements to allow Bahamians to stay with relatives in the United States.

Democratic U.S. Representative Frederica Wilson of Florida has sent a letter expressing support for a program known as Temporary Protected Status, which allows foreign nationals whose home countries have been hurt by a war or natural disaster to live and work in the United States.

Fourteen other members of Florida’s 27-seat congressional delegation, including two Republicans, co-signed the letter, and Wilson’s office said she expected others to do so this week.

TPS is a limited tool, giving legal status only to those already living in the United States, and lasting for up to 18 months, though in the past administrations have often extended them for years.

Morgan told reporters he has not yet discussed TPS with Trump or other officials.

Some natural disasters, like Hurricane Mitch’s devastation of Honduras and Nicaragua in 1998, have led to TPS declarations for those countries.

Other hurricanes have not prompted TPS. Haiti suffered a series of devastating hurricanes starting with Jeanne in 2004, but Haitians did not receive TPS until January 2010, when a massive earthquake destroyed much of the country.

The U.S. government currently grants TPS to 10 countries, but the Trump administration has worked to end protections for several of those countries as part of its broader anti-immigration push.

For Bahamians looking to come to the United States, the Trump administration could consider “humanitarian parole,” which is offered case by case to individuals who face extremely dire circumstances.

“They definitely have immigration tools at their legal discretion to allow people from the Bahamas to immigrate to the United States,” said Leon Rodriguez, who served as director of U.S. Citizenship and Immigration Services during the administration of Barack Obama, Trump’s Democratic predecessor.

“To turn our backs on people that need help is un-American,” he told Reuters.