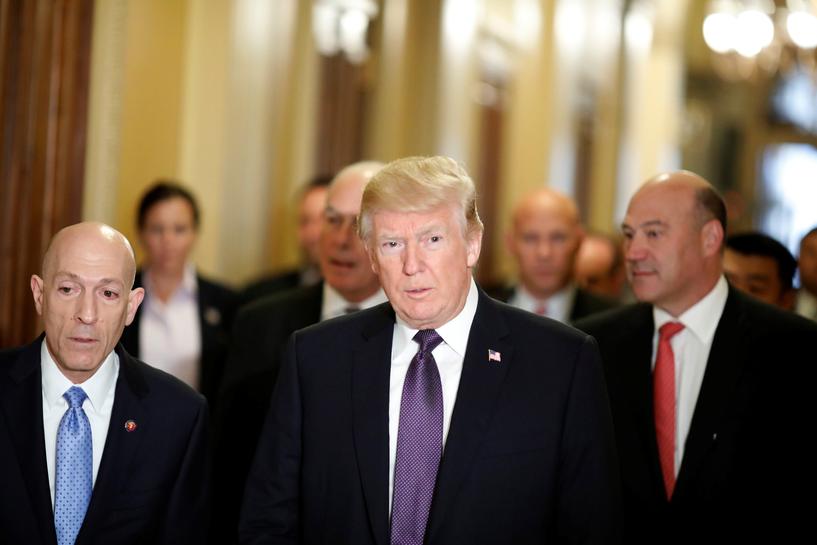 
WASHINGTON (Reuters) – Congressional Republicans took important steps on Thursday toward the biggest U.S. tax-code overhaul since the 1980s, with the House of Representatives approving a broad package of tax cuts, and a Senate panel advancing its own version of the legislation sought by senior lawmakers and President Donald Trump.

The House vote shifted the tax debate to the Senate, where a tax-writing panel finished debating and approved a bill late Thursday evening. That measure has already encountered resistance from some within the Republicans ranks. Full Senate action is expected after next week’s Thanksgiving holiday.

Four Republican senators – enough to derail the legislation – have been talking privately about opposing the bill because it would balloon the federal deficit, according to a Time magazine report.

Trump, who is still seeking his first major legislative win since taking office in January, went to the U.S. Capitol just before the House vote to urge Republicans to pass the tax bill, which Democrats call a giveaway to the wealthy and businesses.

“A simple, fair and competitive tax code will be rocket fuel for our economy, and it’s within our reach. Now is the time to deliver,” White House spokeswoman Sarah Sanders said after the largely party-line House vote of 227-205.

Congress has not thoroughly overhauled the sprawling U.S. tax code since Republican Ronald Reagan was president. The House measure is not as comprehensive as Reagan’s 1986 package, but it is more ambitious than anything since then.

The path forward for the tax plan in the Senate, where Republicans have a narrow majority, is fraught with obstacles about concerns over the deficit, healthcare and the distribution of tax benefits. Republicans can lose no more than two Senate votes if Democrats remain united in opposition.

Senate Republican tax-writers earlier this week made the risky decision of tying their plan to a repeal of the requirement for people to get healthcare insurance under former President Barack Obama’s Affordable Care Act. That exposed the tax initiative to the same political forces that wrecked Republicans’ anti-Obamacare push earlier in July.

‘FIGHT IS NOT OVER’

The House bill, estimated to increase the federal deficit by nearly $1.5 trillion over 10 years, would consolidate individual and family tax brackets to four from seven and reduce the corporate tax rate to 20 percent from 35 percent.

It also would scale back or end some popular tax deductions, including one for state and local income taxes, while preserving a capped deduction for property tax payments.

Democrats have pointed to analyses showing millions of Americans could end up with a tax hike because of eliminated deductions. Repealing or shrinking some deductions is a way to offset the revenue lost from tax cuts.

“It’s a shameful piece of legislation, and the Republicans should know better,” House Democratic leader Nancy Pelosi told lawmakers before the vote.

Senate Democratic leader Chuck Schumer warned Republicans that by increasing the deficit, the tax bill would imperil other important priorities such as military spending.

Thirteen House Republicans opposed the bill, all but one from New York, New Jersey or California – states with high taxes where residents would feel the pinch from eliminating the deduction for state and local income taxes.

“This fight is not over. I look forward to continuing negotiations to improve this proposal for my constituents,” said Republican Representative Lee Zeldin of New York, who voted against the bill.

U.S. President Donald Trump arrives with Director of the National Economic Council Gary Cohn at the U.S. Capitol to meet with House Republicans ahead of their vote on the “Tax Cuts and Jobs Act” in Washington, U.S., November 16, 2017. REUTERS/Aaron P. Bernstein

Investors have cheered the prospect of a tax overhaul. U.S. stocks rose and the dollar edged higher against a basket of major currencies on Thursday after the House vote.

Brian Battle, director of trading at Performance Trust Capital Partners in Chicago, said stocks’ strong gains on the day were helped by the House vote.

“It’s helping stocks now and the bond market’s turned around,” he said. “The tax plan isn’t a foregone conclusion, but it passed the lowest hurdle in the House. The even higher hurdle is to have something pass in the Senate.”

Republicans have long promised tax cuts and see enacting them as critical to their prospects of retaining power in Washington in the November 2018 congressional elections, particularly after failing to meet their promise to repeal the Affordable Care Act, better known as Obamacare.

But it will be a challenge in the 100-seat Senate, where Republicans have only a 52-48 majority.

A Lankford spokesman said he was “eager to work with colleagues to pass tax reform.”

Flake, who often clashes with Trump and has announced he will not seek re-election next year, told Reuters on Thursday he was “more worried about the fiscal problem” than other issues.

Several other senators, including Ron Johnson and Susan Collins, who helped sink the Republican effort to repeal Obamacare, have expressed concerns.

Johnson announced his opposition because of what he said were unequal rates for small businesses and non-corporate enterprises known as “pass-throughs,” versus corporations. He is working with the White House to fix the issue, he told Reuters.

Senator John McCain, a Republican who also voted against the

Nonpartisan congressional analysts say the provision to repeal the health insurance mandate in the Senate version would drive up premium costs and cause some 13 million Americans to lose coverage.

If the full Senate approves its measure, it will have to be reconciled with the House version before legislation can be sent to Trump’s desk for his signature.

Republican Representative Tom Cole said that should not be a problem. “There’s no issue here that can’t be ironed out and settled between us,” Cole told reporters.