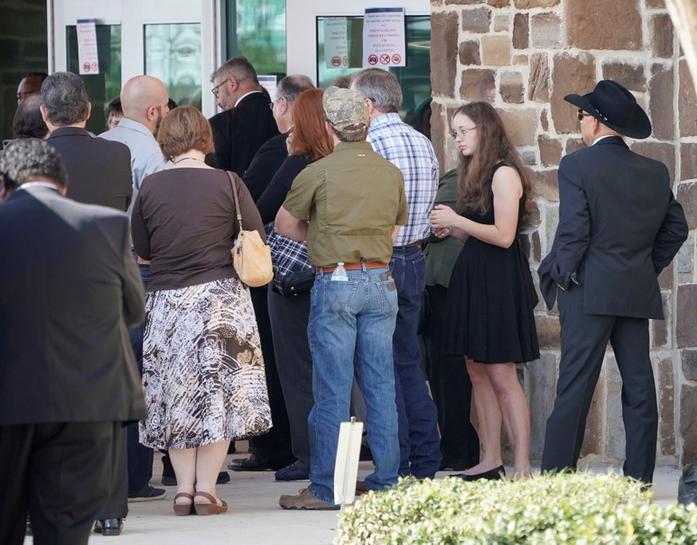 
FLORESVILLE, Texas (Reuters) – About 3,000 people packed a funeral service on Wednesday to mourn a Texas family that suffered losses to three generations when a man with an assault weapon opened fire at a rural church on Nov. 5 and killed 26 people.

Mourners gather for a funeral for six members of the Holcombe family and three members of the Hill family, victims of the Sutherland Springs Baptist church shooting, in Floresville, Texas, U.S., November 15, 2017. REUTERS/Darren Abate

Hundreds had to be turned away from the public memorial for nine members of the Holcombe family after the crowd filled an event center to capacity in the town of Floresville, about 15 miles from the First Baptist Church in Sutherland Springs, where the attack took place.

The funeral was closed to the media and a private burial will be held at a later time, organizers said.

In the crowd outside, mourners hugged and shed tears, while those who could not get in signed memorial books.

Among those killed in the deadliest mass shooting in modern Texas history were John Bryan Holcombe, who was leading services in the church, and his wife Karla. Their son Marc “Danny” Holcombe died along with his 18-month-old daughter Noah.

Mourners gather for a funeral for six members of the Holcombe family and three members of the Hill family, victims of the Sutherland Springs Baptist church shooting, in Floresville, Texas, U.S., November 15, 2017. REUTERS/Darren Abate

The family was well known in the area about 30 miles east of San Antonio. Condolence messages have been pouring in to the Facebook page of the Franklin Funeral Home.

Joe Holcombe, 86, and his wife, Claryce, 84, the parents of John Holcombe, have turned to their Christian faith to help them through the enormous loss to their family.

Joe Holcombe told Reuters that he and his wife believe their dead family members are alive in heaven.

“We know exactly where the family is, and it’s not going to be long until we’ll both be there,” he said. “And we’re really sort of looking forward to it.”