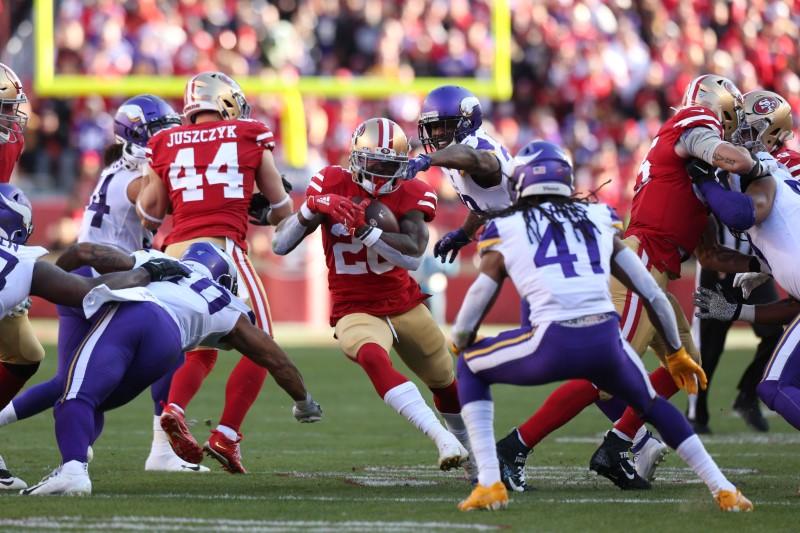 
(Reuters) – The Tennessee Titans on Saturday shocked the high-powered Baltimore Ravens and the San Francisco 49ers won their first NFL playoff game in six seasons to advance to the conference championships.

Ryan Tannehill passed for two touchdowns and ran for another and Derrick Henry rushed for 195 yards and passed for a score that broke the Ravens’ backs as the sixth-seeded Titans buried the number one ranked Ravens 28-12.

The surprising Titans will meet the winner of Sunday’s Houston Texans-Kansas City Chief’s game for the American Football Conference (AFC) title next Sunday.

San Francisco advanced to the National Football Conference championship with a 27-10 win over the Minnesota Vikings. The 49ers will be home to Sunday’s Seattle-Green Bay winner for the NFC title.

The Super Bowl between the conference champions is set for Feb. 2 in Miami.

Running back Tevin Coleman’s two short touchdowns and an aggressive defense powered the 49ers past the Vikings.

The top-seeded 49ers never trailed, their defense holding the Vikings to 21 yards rushing and 147 total yards.

Minnesota had only seven first downs as Vikings quarterback Kirk Cousins could not get on track and was sacked six times.

Top Vikings running back Dalvin Cook was held to a mere 18 yards.

The 49ers’ offensive line also was effective, controlling the game up front.

“Those guys did very well, they moved the guys back, so I could have clear holes to run through,” Coleman, who scored on runs of one and two yards and rushed for 105 yards, told reporters.

The proud San Francisco franchise had not been in the playoffs since the 2013 season.

“We’ve got some things to clean up, but we played well enough to win and that’s all you can ask for,” said 49ers tight end George Kittle. “Playoff football anyone can win and we just made more plays today.”

Quarterback Jimmy Garoppolo got the 49ers rolling, hitting Kendrick Bourne with a three-yard touchdown pass for their opening drive.

He completed 11 of 19 passes for 131 yards and one interception.

Minnesota came back to tie the score on Cousins’ 41-yard pass to Stefon Diggs, but Coleman’s first touchdown put San Francisco ahead 14-7.

The teams traded field goals before the 49ers put the game out of reach 24-10 on Coleman’s second touchdown run after Richard Sherman’s interception of Cousin.

Cousins, who had led Minnesota to a surprising overtime win over the New Orleans Saints last weekend, passed for 172 yards this time, connecting on 21 of 29 attempts with an interception.