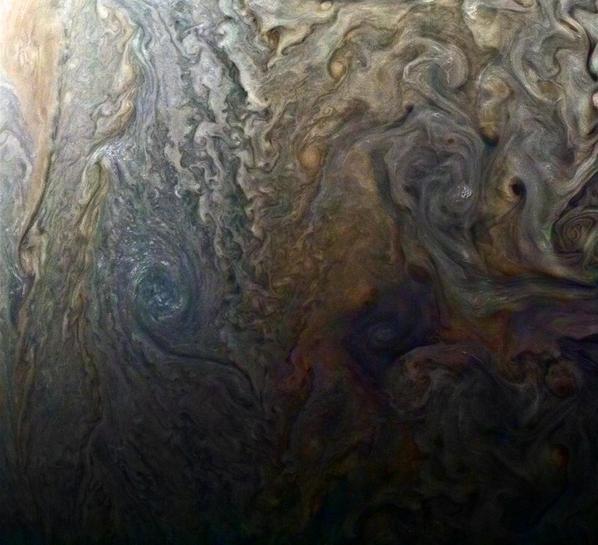 CAPE CANAVERAL, Fla. Jupiter’s atmosphere features colossal cyclones and rivers of ammonia welling up from deep inside the solar system’s largest planet, researchers said on Thursday, publishing the first insights from a NASA spacecraft flying around the gas giant.

The cyclones were discovered as the Juno spacecraft made the first of at least 12 planned close encounters with Jupiter, which scientists believe set the stage for the development of Earth and other planets in the solar system.

Juno found cyclones as big as 870 miles (1,400 km) in diameter swirling over Jupiter’s north and south poles, the research published in this week’s issue of the journal Science shows.

The spacecraft also detected an ammonia belt extending from the top of the atmosphere to hundreds of miles into Juno’s interior, as far down as Juno’s instruments can see. Outside the band, Juno found other features in the atmosphere, rather than the expected homogeneous mix of gas.

“Jupiter is surprising us in almost every way,” lead researcher Scott Bolton, with the Southwest Research Institute in San Antonio, Texas, said in a phone interview. “We’re seeing hints that it is pretty exotic.”

Preliminary results suggest that Jupiter may have winds at all levels creating movement, an unanticipated finding, he added.

Scientists expected Jupiter, which is more than 11 times the diameter of Earth, to be fairly uniform beneath its clouds. But “it doesn’t look like its rotating like a solid body,” Bolton said.

The findings released on Thursday were based on data collected when Juno passed about 2,600 miles (4,200 km) around Jupiter’s poles on Aug. 27.

During Juno’s next flyby on July 11, the spacecraft will pass directly over the planet’s Great Red Spot, a massive storm south of the equator that has existed for centuries.

Scientists hope to learn how the storm maintains itself and if a mass of material underlies the churning clouds.

Juno is expected to continue its highly elliptical orbit around Jupiter for months, swooping close every 53 days to map the planet’s interior so scientists can learn more about how and where Jupiter formed.

Like the sun, the gas giant is mostly hydrogen and helium, but it also has carbon, nitrogen, oxygen and other elements, as well as organics and gases. Scientists hope that learning more about Jupiter’s evolution will illuminate how Earth – and possibly other planets – were supplied with the ingredients for life.