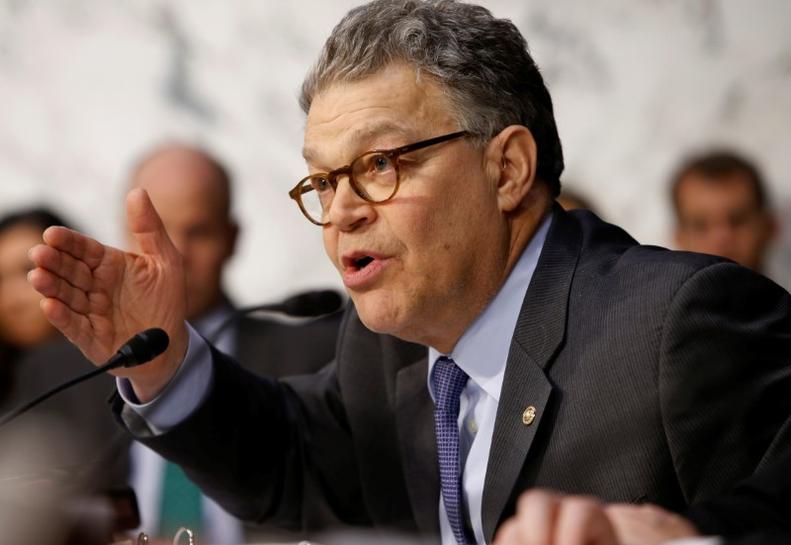 
WASHINGTON (Reuters) – A radio broadcaster accused U.S. Senator Al Franken on Thursday of touching her breasts while she slept and forcing a kiss on her in 2006 when he was still a comedian and the two were preparing to perform before U.S. troops in the Middle East.

Anchor Leeann Tweeden related her experience in a first-person account on the website of Los Angeles station KABC amid outrage over numerous reports of sexual misconduct by powerful men from Hollywood to Capitol Hill.

Franken, a Democrat, issued an apology. The Senate’s Democratic and Republican leaders called on the Ethics Committee to review the allegations and Franken said he would cooperate.

Tweeden said Franken wrote a skit that included a kiss between the two and said he insisted upon rehearsing it, which she at first resisted.

“He repeated that actors really need to rehearse everything and that we must practice the kiss. I said ‘OK’ so he would stop badgering me,” she wrote. “We did the line leading up to the kiss and then he came at me, put his hand on the back of my head, mashed his lips against mine and aggressively stuck his tongue in my mouth.”

She said she pushed Franken away but felt disgusted and violated.

Tweeden also said Franken groped her while she slept during their flight home on a military plane. “I felt violated all over again. Embarrassed. Belittled. Humiliated,” Tweeden wrote. “How dare anyone grab my breasts like this and think it’s funny?”

She posted a photo taken at the time of Franken mugging for the camera with his hands above her breasts as she sat in the military aircraft wearing a flak jacket with eyes closed.

“I certainly don’t remember the rehearsal for the skit in the same way, but I send my sincerest apologies to Leeann. As to the photo, it was clearly intended to be funny but wasn‘t. I shouldn’t have done it,” Franken said in a statement.

Reuters was unable to independently verify Tweeden or Franken’s accounts.

She told reporters in a later press conference that she considered the kiss an assault but accepted his apology.

“The apology? Sure, I accept it,” she said. “People make mistakes and of course he knew he made a mistake.”

Senator Al Franken speaks to the media at a gala honoring David Letterman, who is receiving the Mark Twain Prize for American Humor, at Kennedy Center in Washington, U.S., October 22, 2017. REUTERS/Joshua Roberts

In a longer statement issued later, Franken was more contrite. “I don’t know what was in my head when I took that picture, and it doesn’t matter. There’s no excuse. I look at it now and I feel disgusted with myself. It isn’t funny. It’s completely inappropriate,” he said.

The USO, which sponsored the tour on which Franken and Tweeden traveled, said it was never aware of the incident.

“This incident was never reported to the USO,” USO spokeswoman Ashley McLellan said in an email. “We have no knowledge of it. The report is deeply disturbing and does not reflect the values of the USO.”

Franken was a well-known American comedian before he was elected to the U.S. Senate in 2008 as a Democrat from Minnesota.

Sexual misconduct allegations have been leveled against several well-known men in the entertainment industry and Roy Moore, a Republican U.S. Senate candidate in Alabama, has been accused of having sexual contact with teenage girls decades ago. Moore, 70, has denied the accusations and said he was the victim of a witch hunt.

Lawmakers this week shared stories of women and men being propositioned and groped in the halls of the U.S. Capitol as Congress reviewed sexual harassment policies.

“The behavior described is completely unacceptable. Comedy is no excuse for inappropriate conduct, and I believe there should be an ethics investigation,” McCaskill wrote on Twitter.

Former Republican vice presidential candidate Sarah Palin, asked about Alabama Senate candidate Moore, said reporters should be asking her instead about Franken and called up the photograph on her phone.

“This is what you should be asking me about,” Palin said, as she talked to reporters in the U.S. Capitol, complaining about “double standards here.” She added Franken should leave the Senate if the account is true.

Tweeden said she was inspired to tell her story by women members of Congress who spoke up against harassment this week.

“I’m telling my story because there may be others,” she said.